Christmas Tinto Primary School was established on the 16 July 2012, it was established as a result of overcrowding at ACJ Phakade Primary School. The school is situated just off the N2 in Hlathi Drive, Asanda Village in Strand. The school colours are Turquoise and white and its motto is “Together we can”, the community is ravaged with social ills like crime, drugs and alcohol abuse and due to high rate of unemployment the school is no- school fee. Lwandle Township had approximately  70 000 people in the last statistics that was done in 2011 and 90% of those people are Xhosa speaking people and 5% are colored people and the remaining 5% are foreign nationals from neighboring countries. The majority of this community are illiterate and therefore are employed as domestic workers, gardeners, security officers, factory workers etc. That is an estimated percentage of 65% of people who earn between R1000 – R2 500. Some of the people are not working and entirely depended on government social grants and elderly pension. Thispaints a bleak future for the school because parents cannot afford to pay school fees and support fundraising drives of the school. It is not doom and gloom though because instead of dwelling on what we do not have we sometimes take escape by doing what we are good at such as sport and music. The next part will deal with our achievements

The school has done exceptionally well in athletics ever since it took participation in 2014 for the first time. We have had learners that have earned Western Province Colours in both Cross Country and Track. We have had about 3 learners each year in both disciplines (Cross country and Track) that have ran in  the South African School’s Athletic Championships in 2014,2015,2016 and we are on track even in this year (2017). We have had an athlete that was chosen on City Vision/Masidlale Sport Star of the year in 2015. This learner was unbeaten provincially in both Track and Cross country. This year alone have seen our school having about 5 learners who earned the colours for the province. 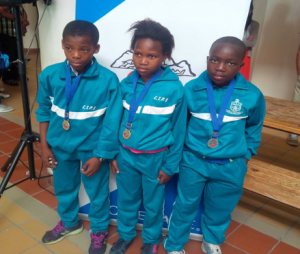 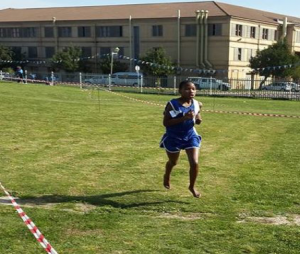 We are also good with music because our Foundation phase and infants choir took number 1 and number 2 respectively in the Eisteddfod Music Competition in July 2017.

Christmas Tinto Primary is school is situated at a township and the parents here are either earning low income or no income at all. We have managed to get a library donated but there are no books at the library, we have no science laboratory and computer lab. We do not even have sport fields for our children to play but we do get things done nonetheless under very difficult circumstances. We therefore request a science lab for our children so that they can have interest in the magic of science.

Our results are continuing being low because we do not have reading books and yet we have a library that was donated in a form of a shipping container.

A school uniform represents much more than a piece of cloth that we see, it gives the child identity and confidence. It says you are part of us, part of the collective and that is the aim of the uniform so that all children can look the same at school without any child feeling small or less unfortunate than the other. I must say though a project called IMIBALA TRUST has managed to sponsor school uniform but they can’t sponsor every child.

It is a tradition or a culture to have this function at the end of each year. This is to honor leaners who have done well but most of all to say goodbye to them. It is every child’s dream when they start in grade 1 that when they reach grade 7 they will be treated to a warm meal in a nice hotel 7 years later. This might seem small and petty even insignificant to the privileged but to someone who has never been to a hotel is a big deal. The sadness that you see in the children’s eyes when they know that they won’t be going is heart breaking.

I will conclude by saying “ A LEADER IS A DELEAR IN HOPE” by Napoleon Bonaparte, I don’t necessarily have all the answers on being the headmaster of the school and at times God Knows that I have no idea where I am taking or steering this ship. That doesn’t stop me though I keep going because “I am dealer in hope”. Maybe my sitting down and trying to have all the answers will deter me or prove to be no action on my side. I chose to continue moving because my sitting down and complain about less resources, crime, poverty and drugs will take me nowhere. I chose to wake each day and see hope because “I am a dealer in hope”. I am hopeful that one day half of my children will have uniform, I am hopeful that the library will be filled with books and I am hopeful that our grade 7 will go to the valedictory and all of them will go. When you have nothing else hope is the only thing that you have that is why “I am a dealer in hope”

I sometimes operate like an educated man because there are times that I throw caution to the wind, by that I mean how it will help to keep looking at my budget when I know for sure it will not last me a year. Will it help me to give my leaners small enough to stay ‘alive’ no I sometimes believe in throwing caution to the wind an say “ tomorrow will take care of itself” let’s just eat and be joyful now rather than worrying about tomorrow. If tomorrow comes and we have nothing but at least we will remember the feast we had and tell stories about it. I do this because I deal in hope, I am hopeful that things will get better tomorrow. I am hopeful that each new day has a miracle waiting to happen behind that morning. I am hopeful because I believe in humankind, I am hopeful because I cannot give up I got to keep going. Above all I am hopeful because losing hope is like downgrading your own dream to match your reality and I prefer upgrade my faith with a hope to match my destiny and simply because  “A leader is a dealer in hope”

You can find out more about which cookies we are using or switch them off in settings.

This website uses cookies so that we can provide you with the best user experience possible. Cookie information is stored in your browser and performs functions such as recognising you when you return to our website and helping our team to understand which sections of the website you find most interesting and useful.

Strictly Necessary Cookie should be enabled at all times so that we can save your preferences for cookie settings.

If you disable this cookie, we will not be able to save your preferences. This means that every time you visit this website you will need to enable or disable cookies again.